i think i might have a thing for rust..


While enjoying my mug of hot chocolate this morning, I couldn't help admire the rosy glow a pot of my succulents had taken on and how lovely they looked against some rusted hurricanes..

Then I began to notice all the other warm rusty hued things that had crept into our home over the years. I'm surrounded..


I also (and perhaps subconsciously) picked out a rust knit skirt for myself and a pair of oxblood pants for Thom while shopping the other day.


It appears I musty really have a thing for rusty hues... Or maybe they just make everything feel a little toastier, when it's cold and grey outside?  What cool weather colours are you drawn to??

Email ThisBlogThis!Share to TwitterShare to FacebookShare to Pinterest
Labels: I love colour, winter

a spot of home sewing...

Where on earth have the last seven weeks gone?!

Other than keeping busy with a little freelance work, preparing for the imminent arrival of numero two (now only 3 and a bit weeks away) and surviving the first family flu of the season, it's just a blur...

I admit, third trimester fatigue has well and truly set in, so any motivation to post a blog is generally overridden by an opportunity to curl up and have a nap...

I've also been churning out a few soft furnishings (ok mainly cushion covers) as part of my nesting craze.

First job was transforming the junk/ironing room into some semblance of a nursery..  Although it's a tiny space, it's filled with morning sunlight and now with the injection of some colour, it's beginning to feel like a proper little nursery. Just add baby!

Thom is quite intrigued by all this shuffling of furniture (the cot was only recently his), the new car seat, pram etc.., so as not to feel left out, his room got a little home sewn love too..


And lastly our bedroom got some much long overdue attention...

Still very much a work in progress, the room is slowly coming together. My painted bedsides are finally in, after many months gathering dust in the garage.
I also made a pair of new pillowslips (the easiest, cheapest thing in the world) from this pretty floral cotton I found at Spotlight and revamped an old Indian mirrored cushion with some coral pink drill for a pop of colour.. 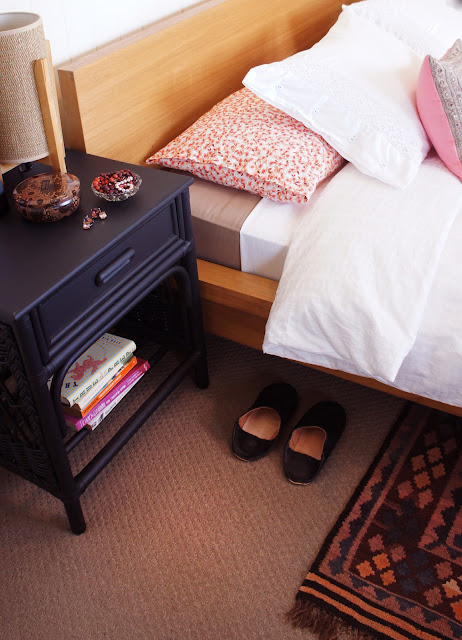 Now with Thom taking his midday nap, I really should get on with sorting out the study.
Or I could just have a little lie down instead...

I love when clever types turn their light bulb ideas into successful businesses. I came across this when searching for tips to salvage a favourite pair of my husband's jeans...

Denim Therapy are magicians when it comes to mending denim and can breathe new life into your most well loved and worn strides. They work out of NYC , but will take in jobs from just about anywhere.

These before and after photos are quite amazing, don't you think?!

Email ThisBlogThis!Share to TwitterShare to FacebookShare to Pinterest
Labels: my style file, people who inspire 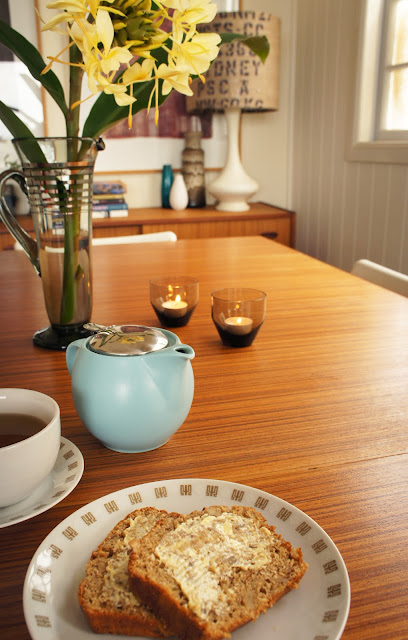 Yesterday morning I decided to tick off a few things on my steadily growing to do list.. First up was transforming a bunch of forgotten and very brown bananas, into some kind of banana bread/cake thing.

Having never made banana loaf before and not being one to stick to a recipe, I did as I always do.., started with a basic idea and then made it up as I went..

Then with the loaf baking away and Thom tucked in for his morning nap, I got to work on a new lampshade for a favorite vintage lamp. I've been meaning to replace the shade forever, the current one is all cracked inside and to be honest is just boring..

Awhile ago I picked up a burlap coffee sack from Reverse Garbage and then found a simple polypropylene drum shade at Ikea. After a quick google search for diy lampshades, it was a matter of grabbing scissors, spray adhesive, a bunch of pegs and voila, I have myself a spiffing new shade!! I admit it still needs couple of lengths of fabric binding to finish it off in the inside, but not bad for less than 20 dollars and 15 or so minutes of my time..!

The banana loaf turned out ok too. Here's the recipe (of sorts)..

1. Preheat oven at 180 degrees
2. Grease and line a loaf tin with baking paper.
3. Add dry ingredients to a large mixing bowl.
4. Combine wet ingredients in another bowl and then add to the dry ingredients.
5. Mix together until well combined.
6. Spoon mixture into lined tin and top with the extra walnuts.
7. Bake for 45 - 50 mins or until golden on top (or a skewer to the centre comes out clean). 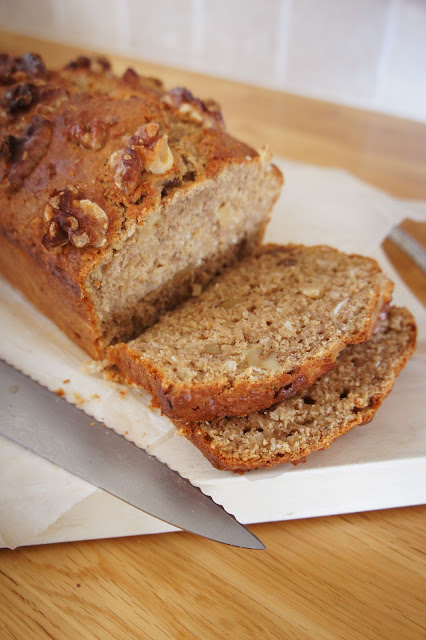 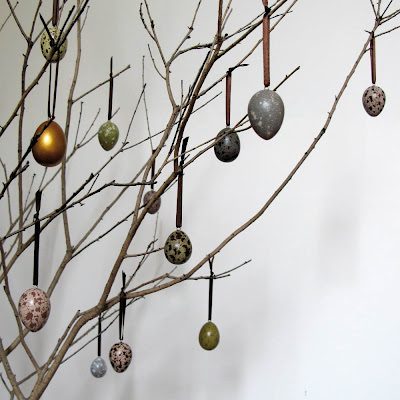 Easter is upon us again..  This weekend all the family will be bunked up together at my parents beautiful property Cloudlake.
I can't wait, as it's generally around 5 degrees cooler up there and will finally feel like Autumn should, unlike the lingering Summer heat we're experiencing down here..
I'm also anticipating there will be much baking, choccy scoffing, gossip, giggles instore. As well as plenty of country walks and maybe even a little Easter crafting with my two gorgeous nieces!
Speaking of which, how exquisite are these speckled, plaster eggs?! Handmade by my very clever friend Emily, they make a beautiful ornament for any time of the year..
You can see more of Emily's endless creativity on her blog Kuber . 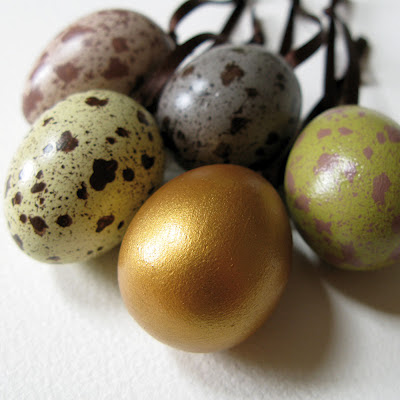 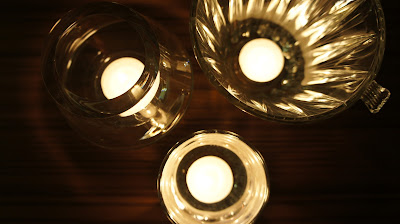 We'll be marking the occasion with a romantic candlelit bbq,  just the three of us... What will you be doing? Check out the Earth Hour site here for more info and fun ways to participate.

And forget the hour, why not make a whole evening of it. After all everyone looks better by candlelight!!

Email ThisBlogThis!Share to TwitterShare to FacebookShare to Pinterest
Labels: people who inspire

Inspired by all the beautiful brights I saw on the Anthropologie site, I snapped up a couple of cheerful items this week to chase away the rainy day (or should I say rainy month) blues!
All on the cheap though, I'm trying to be good.. 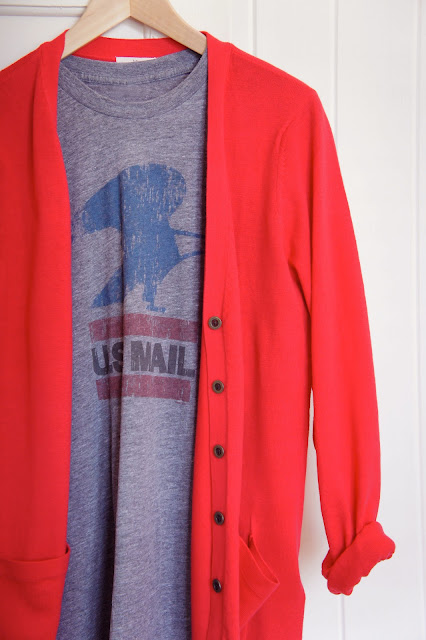 One soft cotton boyfriend cardi in rasberry red, for keeping the bump cosy this Autumn,  $19 from MIX at Coles (yes, as in the Supermarket). 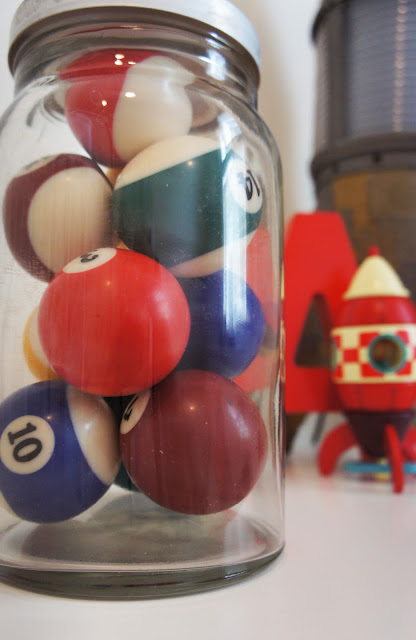 A set of vintage billiard balls  just for a bit of fun,
$2 from the Aid for the Blind Store, Wynnum 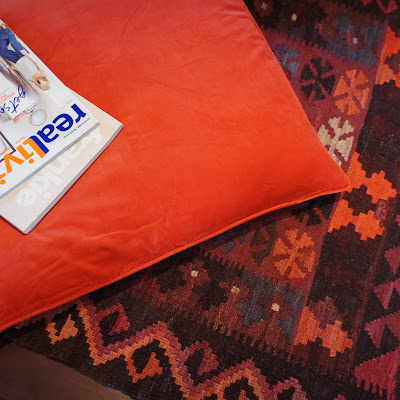 A luxe new cushion cover in jaffa orange velvet, perfect for story time or a little
r & r with a couple of new mags. $16 from Ikea.
Feeling brighter already, a wee bit of retail therapy always does the trick. Hey and the rain has stopped too! Hurray!!
Have a great weekend! xx
Posted by EL at home... at 18:00 2 comments

EL at home...
design devotee, avid crafter & new mum... with a little time on my hands.